I am sitting by the deck in early evening, as the shadows grow long upon the sun-dappled grass, listening to the call of a mourning dove. As I watch a diversity of finches and other song birds eat at the bird feeder and play in the stone bird bath, chipmunks, squirrels, and butterflies all dance about each other in the peaceful quiet of a Vermont backyard. There are no sounds of traffic or other human voices, only the whistling of the gentle wind through acres upon acres of trees. And the mourning dove continues to cry. 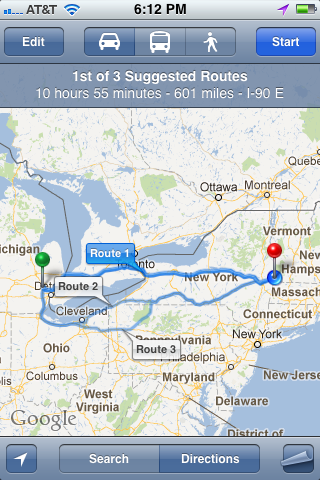 A short burst of rain on Saturday night at Green Lake broke through the heat wave, and as we awoke Sunday morning to drive to Vermont we knew we would be traversing through more pleasant temperatures. We planned to set off by 8:00 am, but were delightfully delayed by the unexpected arrival of another dear aunt, who had come down several hours the day before from northern Michigan. We only had a half hour with her, but it was enough to double our smiles at leaving, while also strengthening the desire to stay a little longer. Reluctantly we were able to break away from the family embrace and set out through Detroit toward the Canadian border.

I realized as we passed easily through customs––I am after all a dual citizen and have a right to be in both countries––that on this trip we would not only pass through nineteen different states, but one province as well, technically making this not a cross country trip, but a transnational trip! Although I had noticed little change in climate or landscape for the last few days of driving, once in Canada I could begin to discern the more northerly qualities of the land around us. The air smells different up there, more thin yet pure as though it were made from fewer ingredients. The trees became taller and deeper green, with thick foliage in the undergrowth, and swampy ponds choked with bulrushes and reeds. The land appeared less disturbed by human hands, and several stretches of forest would pass before we would see a farm nestled between the trees. Heavy wooden barns and red houses gave the impression of older family farms, although I imagine many of them practice conventional agriculture the same way as their neighboring American farmers do.

We passed over the Grand River and in a fleeting glimpse I saw steep cliff sides topped with entangled trees, the gray rocks plunging into the rushing river. We entered a stretch called the Green Belt where wind rippled silver through long grasses, and meanwhile we settled in to listening to half a dozen or so episodes of This American Life. David Sedaris with his slightly sighing gay whine and perfectly placed adjectival jibes, an episode on bridging the gap between secularists and Christians, gun lovers and gun haters, and even a piece on fiascos including a hilarious description of a Peter Pan production in which absolutely everything went wrong. One of the most interesting episodes was on Harold Washington, the first black mayor of Chicago who was a key player in the slowly shifting racial attitudes in the Windy City. By the end of the day’s driving Ira Glass seemed to have become a third traveler in our car.

Our road navigated along the narrow strip of land between Lakes Erie and Ontario, and our short view of the latter gave the impression of a sea rather than a lake. It is not hard to understand why they are called the Great Lakes. When I was a little girl my mother read me a wonderful story called Paddle to the Sea, about a young Native Canadian boy who carved a tiny boat with a wooden Indian seated in it. He set the boat out in a frozen streambed where it sat until the spring thaw melted its waters and sent the boat sailing downstream. The story follows the little boat and Indian as he descends through each of the Great Lakes and eventually leaves the fresh water for the salt of the ocean. As he floats by an ocean dock he is picked up by a young man working quietly, a man who recognizes every feature of this beautiful carving. Against all odds Paddle to the Sea fulfilled his name and in the same moment found his maker years after he began his journey.

Matt had never seen Niagara falls so we committed to the traffic and tourist attractions to get a view from the Canadian side. On the slow moving road mist from the falls speckled our windshield. People were everywhere. At the end of a half hour wait we were directed into a parking lot, even though we didn’t want to stay long, where $20 was removed from us for a few minutes of parking. Rather disgruntled, we walked along the sidewalk weaving among visitors from all over the world to see the epic falls. An old rusted boat appeared to be disintegrating up river of the plunge. I wondered what horrific accident may have occurred here in the past. At last we were able to see the falls themselves, visible through a haze of mist and rainbows, unimaginable quantities of water gushing over the edge every second. The Maid of the Mist boats approached the crashing waters far below where we stood. I’ll now admit, it was worth the stop.

To return to the US we crossed the Rainbow Bridge and entered New York state. We were on the East Coast. We had driven to New England, a place I have been to many times before but always by plane. It was somewhat surreal. The woods had a different feeling here, that older world change from the forests in the rest of America. Here there were cabbage fields and rivers, rolling hills providing brief open vistas of the state. Gray cliffs towered over the road, and on one a narrow white crucifix had been erected. Little towns poked out among the trees, visible by the height of their church steeples. Unlike the freeways of the West Coast the highways here were guarded by steep tolls. We had definitely come very far.

The sun sank below the horizon and we saw the last of its vermillion light on a wide reservoir over which a duck flew at the same pace as our car. We crossed the border to Vermont and entered Bennington minutes later, to be welcomed by my uncle, aunt, and cousin at their beautiful home. A delicious dinner of grilled salmon, green beans, and fried sweet potatoes awaited us. A truly cozy welcome.

Today was dedicated to sorting through all my belongings that I left here, bringing some items to Goodwill and packing the rest into the Ford Focus. It was like greeting old friends as I opened each box and looked at journals, college notebooks, letters, and art supplies, as well as clothes, cushions, necklaces, and so many other lovely things. After easily parting with three heavy boxes for donation, we managed to pack everything else into the car, even leaving enough space for all three mirrors to be safely used for the drive home. I feel a certain sense of freedom now that I have collected these belongings once again. I now feel as though I have completed a necessary trip that I had the responsibility to take, and now that it is done I have the freedom to travel anywhere new that I want. Not that these current travels are close to over, but rather that I have seen this key piece through.

My cousin, Matt, and I went into town for a few errands, including dropping off the boxes at Goodwill. We stopped at the library and spent a few minutes adding pieces to a 1000 piece puzzle someone had been working on. Next we got ice cream cones and strolled in the sun while licking their dripping sides. Once back at the house I took a brief wander around the property, tasting peas and raspberries in the garden, and lying under the low-branched apple tree to watch the clouds drift past. The temperature was idyllic. Within the hour the three of us were merrily at work in the kitchen, preparing whole wheat pizzas piled high with fresh mozzarella, mushrooms, artichokes, tomatoes, broccoli and, for those who enjoy them, red bell peppers. The whole meal was completed with a plate of ripe cantalope, blueberries, strawberries, and raspberries.

In the morning Matt and I will take our shortest drive of the trip, to the Pioneer Valley of Massachusetts to stay with dear friends and visit the place that, in many ways made me who I am today: Mount Holyoke College.