For twenty-five hundred years the concept of Nature has evolved through the writings of Western History. The myriad meanings of the Greek word phusis have unfolded through history as Nature personified, Nature divine, Nature hidden, Nature secretive, nature separate from humanity, nature inclusive of humanity, nature as dead matter, Nature as art, Nature as All. Pierre Hadot traces this winding history in his book-length essay The Veil of Isis by examining the famous aphorism attributed to the philosopher Heraclitus, “phusis kruptesthai philei,” usually translated as “Nature loves to hide.”[1] Using these three cryptic words, whose meaning it seems also loves to hide, Hadot explores the many different ways this aphorism could be—and has been—translated, and the various effects such interpretations have had upon the continuing relationship humanity has with the world into which we each are born. Hadot perceives how traditional metaphors such as Heraclitus’ phrase will

hold sway for centuries over successive generations like a kind of program to be realized, a task to be accomplished, or an attitude to be assumed, even if, throughout the ages, the meaning given to these sentences, images, and metaphors can be profoundly modified.[2] 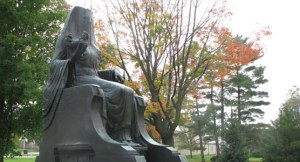 Why is it that Nature loves to hide? What is it she—for in Hadot’s traced lineage Nature is always unquestioningly personified as female—is hiding, and from whom is she hiding it? History has offered many answers, from Nature as divine mystery, to Nature as weak and inferior and thus wrapped up in shame, Nature as clothed in imagination, Nature as malicious toward humanity, Nature protective of humanity: all of these and more have been reasons given for why Nature’s veils have been deemed so difficult to peel away.

At the beginning of the nineteenth century, the metaphor of the veils and the secrets of Nature never ceases to fade, until it gives way to amazement before an unveiled Nature, which, in Goethe’s expression, henceforth became “mysterious in full daylight,” in the nudity of her presence.[4]

The image of veiled Nature has tempted the curiosity of humanity from deep into our ancestral memory until the present day, although the understanding of who and what Nature is has shifted dramatically over that time.

Hadot posits two archetypal narratives to illustrate what he sees as the primary approaches humanity has taken in the quest to unveil Nature: the Promethean and the Orphic. In Hadot’s own words, these approaches or perspectives can be understood as follows:

Orpheus thus penetrates the secrets of nature not through violence but through melody, rhythm, and harmony. Whereas the Promethean attitude is inspired by audacity, boundless curiosity, the will to power, and the search for utility, the Orphic attitude, by contrast, is inspired by respect in the face of mystery and disinterestedness.[5]

The Promethean attitude is based upon a notion of progress in which humanity will some day attain all of nature’s veiled secrets so that they might be put to use for the betterment of the human species. The three main methods of the Promethean attitude, as Hadot delineates them, are that of experimentation, mechanics, and magic, all of which manipulate nature in some way for a specific end. In this perspective Nature is seen as hiding her secrets out of hostility for humanity, keeping her knowledge hidden due to a kind of spite.

The Orphic attitude takes the approach that “if nature has hidden certain things, then it had good reasons to hide them.”[6] In many ways the Orphic is an antidote to the Promethean, although it extends far beyond that as well. The Orphic approach is that of approaching nature through the contemplation of art, poetry, music, classical physics, and myth. Hadot’s archetypal analysis of nature is itself an Orphic approach, in that he draws on myth and art to unfold the meanings of humanity’s changing relationship to the natural world.

In our current era of ecological destruction and crisis, understanding what is at stake and how we came to this precipice is key to moving in a new direction. If we do not have an understanding of what humanity has perceived nature to be throughout history then we have little chance of knowing how to heal our relationship to that which we call nature. Although in The Veil of Isis Hadot seems to favor more of an Orphic approach, in that it is more holistic, contemplative, non-violent, and non-exploitative, it could be that finding a bridge between the two perspectives is a better way forward. Although a deep chasm has often separated the two, Hadot offers examples of individual thinkers who embody both perspectives within themselves. For example, to dive back toward Western philosophy’s beginnings, Hadot demonstrates how Plato carries both a Promethean and Orphic attitude within his works. In the Timaeus, “Plato represents the world fashioned in an artisanal way,” but that world can also be understood through mechanical, mathematical models.[7] Plato saw phusis as divine art.[8] For Hadot, the view of nature as art is in itself part of a solution for overcoming the division of human and nature that has contributed to create the ecological crisis.

Hadot’s work is not prescriptive, yet he indicates that finding bridges may be what is needed: a bridge between Promethean and Orphic, a bridge between humanity and nature—and in many ways art is able to fill this bridging role.

Hadot, Pierre. The Veil of Isis: An Essay on the History of the Idea of Nature. Translated by Michael Chase. Cambridge, MA: The Belknap Press of Harvard University Press, 2006.

[1] Pierre Hadot, The Veil of Isis: An Essay on the History of the Idea of Nature, trans. Michael Chase (Cambridge, MA: The Belknap Press of Harvard University Press, 2006), 1.