“The realm of fairy-story is wide and deep and high and filled with many things: all manner of beasts and birds are found there; shoreless seas and stars uncounted; beauty that is an enchantment, and an ever-present peril; both joy and sorrow as sharp as swords.”
– J.R.R. Tolkien[1]

With these words J.R.R. Tolkien introduces his readers to Faërie, the domain of fairy-story, a realm encountered through Imagination. But what, one might ask, are fairy-stories? Often fairy-stories have been construed as short tales written for children, of little weight or importance in the world of adult matters. In five separate essays, this simplistic perspective is argued against by Tolkien, C.S. Lewis, George MacDonald, G.K. Chesterton, and Stephen Clark, who each wrote their own defense of the genre of fairy-story. From differing yet complementary perspectives, these five authors address what fairy-story is and why it is important, exploring the relationship between fantasy and reality, Truth and Imagination, and the laws of consistency and morality that allow an true imaginal world to come into being.

Lewis opens his short essay “On Stories” by pointing out that little attention has been paid by critics to Story, or at least to the particular qualities of Story that make it alluring. The particulars, the details of the experience, that which creates the tangible atmosphere and aura, are what draw the reader into the narrative—not some abstract plot concept but rather the unique qualities of the story lure us to return again and again to certain tales. Indeed, Lewis writes,

We do not enjoy a story fully at the first reading. Not till the curiosity, the sheer narrative lust, has been given its sop and laid asleep, are we at leisure to savour the real beauties. Till then, it is like wasting great wine on a ravenous natural thirst which merely wants cold wetness. The children understand this well when they ask for the same story over and over again, and in the same words.[2]

Although Lewis here refers to children’s appreciation of fairy-story, he and Tolkien—and I would argue the other three authors discussed here as well—agree that fairy-stories are by no means exclusively intended for children. Tolkien writes,

Tolkien goes on to say, “If fairy-story as a kind is worth reading at all it is worthy to be written for and read by adults.”[4] The stories that affect us most as children are usually those we read again and again long into adulthood. Such stories shape who we are as individuals, allowing us as readers to fully inhabit the emotions, experiences, challenges, and breakthroughs of a multitude of people. Through story, and the inherent awakening of Imagination, we can bring more of ourselves forth into the world and develop more fully.

To create a fairy-story worth reading, a successful fantasy, the creator must imbue it with what Tolkien calls an “inner consistency of reality,” a quality that is bestowed only by the power of Imagination.[5] The successful storyteller “makes a Secondary World which your mind can enter. Inside it, what he relates is ‘true’: it accords with the laws of that world. You therefore believe it, while you are, as it were, inside.”[6] MacDonald, as written in his essay “The Fantastic Imagination,” shares with Tolkien this perspective on internal consistency: “To be able to live a moment in an imagined world, we must see the laws of its existence obeyed.”[7] Without such laws an imaginal world could not hold, it would fall apart into meaningless disconnection. For Tolkien and MacDonald, these internal laws, the ‘inner consistency of reality,’ are given by the power of Imagination. Imagination allows one to access to Truth, and Truth is what provides an imaginal world with its own reality.

Law is the soil in which alone beauty will grow; beauty is the only stuff in which Truth can be clothed; and you may, if you will, call Imagination the tailor that cuts her garment to fit her, and Fancy his journeyman that puts the pieces of them together, or at most embroiders their button-holes.[8]

Within the heart of Faërie, as understood by these authors, is also a consistent moral law that is more pronounced than the moral law of the Primary World. Chesterton writes in his essay “Fairy Tales”: “I think poets have made a mistake: because the world of the fairy-tales is a brighter and more varied world than ours, they have fancied it less moral; really it is brighter and more varied because it is more moral.”[10] Indeed, the clear morality present in fairy-stories is a sign of their enchantment; when such connection is severed the world becomes disenchanted. Perhaps this is why, in a time when the dominant world view is largely disenchanted, fairy-stories are so alluring—even when the critics say that as adults we must put them aside. Fairy-stories allow access to Truth in a way that everyday lived experience may not. Tolkien points towards this when he writes, “The peculiar quality of the ‘joy’ in successful Fantasy can thus be explained as a sudden glimpse of the underlying reality or truth. It is not only a ‘consolation’ for the sorrow of this world; but a satisfaction, and an answer to that question, ‘Is it true?’”[11] Shining through the fantastical narrative is that glimpse of Truth, which can be perceived more clearly through the fresh lens of fairy-story, rather than the clouded window of our ordinary, everyday perception.

The Truth glimpsed in fairy-story is the Truth that broadens one’s perspective beyond the confines of a disenchanted, materialistic world view. Clark, in his essay “How To Believe In Fairies,” writes,

It is to take folk-stories seriously as accounts of the “dreamworld,” the realm of the conscious experience of which our “waking world” is only a province, to acknowledge and make real to ourselves the presence of spirits that enter our consciousness as moods of love or alienation, wild joy or anger. In W.B. Yeats’s philosophy fairies are the moods and characters of human life, conceived not as alterations in a material being, but as the spiritual rulers of an idealistically conceived world.[12]

Clark articulates the idea that to believe in fairies, or mermaids or dragons, or other inhabitants of Faërie, is not to reduce them to some facet of the known material world—such as insects, manatees, or other mistakenly glimpsed animals—but to accept as an essential part of these beings the very mystery of what they are. Tolkien writes that Elves, and other creatures of Faërie, are “true” “even if they are only creations of Man’s mind, ‘true’ only as reflecting in a particular way one of Man’s visions of Truth.”[13] The beings of Faërie are born of Truth and mystery, and if we do not reduce them to mistaken perceptions of the physical world, or mere flights of Fancy, Truth and mystery comingle and give birth to something real.

For Tolkien fairy-stories provide a “recovery” of the Primary World, “a regaining of a clear view.”[14] Fantasy gives us the opportunity “to clean our windows; so that the things seen clearly may be freed from the drab blur of triteness and familiarity.”[15] Returning from the pages of fantasy to one’s life, our mundane habits give way to the patterning of story. Imagination breathes new life into the simplest actions—once again we can recognize the miracle in good food, the laughter of a friend, the colors of the setting Sun. In Lewis’s words, “. . . the whole story, paradoxically enough, strengthens our relish for real life.” Yet Lewis seems to diverge from Tolkien when he says: “This excursion into the preposterous sends us back with renewed pleasure to the actual.”[16] I do not feel Tolkien draws such a distinct line between the ‘preposterous’ and the ‘actual.’ Fantasy and reality for Tolkien cannot ultimately be separated.

On this matter, Clark seems to be in greater agreement with Lewis than Tolkien. Lewis writes “that is one of the functions, of art: to present what the narrow desperately practical perspectives of real life exclude.”[17] I would argue that real life does not exclude the fantastical with which art reacquaints us; rather habit and routine allow us to forget the fantastical inherently present in real life. Clark argues that the ‘desperately practical perspectives of real life,’ as Lewis describes them, are what allow us to fully appreciate and understand the world of Faërie:

Only those who have lived out of water know what water is. Only those whose ordinary human life is structured by ceremonial and human meaning, who know of their duties and their perils, their friends and children, can clearly conceive that form of life which is fairy.[18]

I would say that the experience of disenchantment, of seeing the world from a desperately practical perspective, is simply a forgetting of the enchantment inherent in our lived reality, the magic of the waking world. Such forgetting is its own form of enchantment. We are compelled, as Lewis felt, to return again and again to the great stories that affected our lives so deeply because some part of us knows we want to remember. We forget so that we may remember. “The primal desire at the heart of Faërie,” Tolkien writes, is “the realisation, independent of the conceiving mind, of imagined wonder.”[19] We forget so that again and again we may return, through story and Imagination, to experience wonder once more.

Tolkien, J.R.R. “On Fairy-Stories.” In The Monsters and the Critics. Edited by 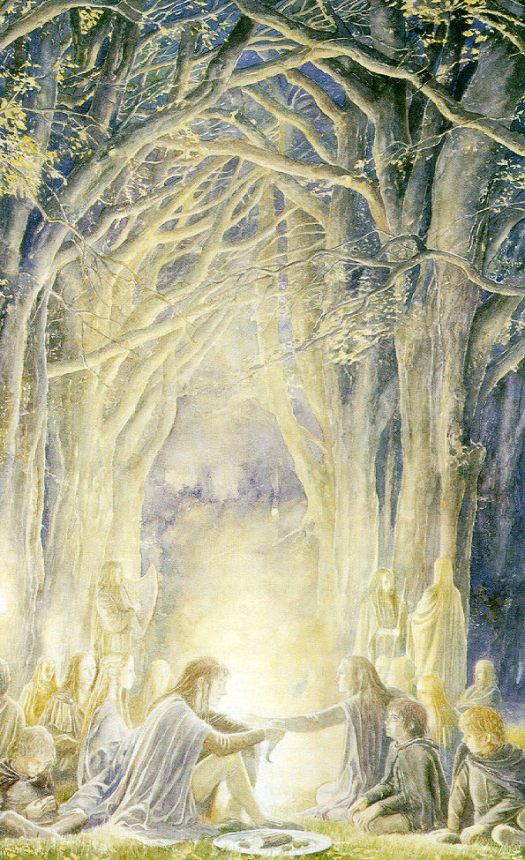