In the first few pages of his book, Dale Jamieson situates his perspective as coming from a generally Western point of view, saying that although he lived through many of the events he details in the book he was not at the center of the action. I appreciated this nod to recognizing his position in relation to the material he was addressing, although I wished he had continued to do so more throughout the book—and had addressed other influences on perspective such as gender, race, class, and so forth. Jamieson acknowledges at the outset that he is coming from the perspective of an analytical philosopher, but that very position seems to blind him to the multiplicity of perspectives that can be taken in relation to the issue of climate change. 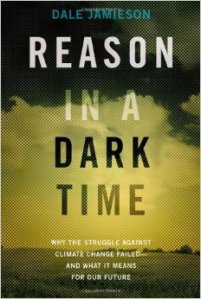 Reason in a Dark Time, simply put, is a pessimistic book. Jamieson shows his readers how globally we have failed to address climate change. The outlook feels bleak, and his concluding seven priorities for action do not seem to carry much hope considering he has spent the previous 200 hundred pages demonstrating how dysfunctionally the international negotiation system operates. The core of the book focuses on what Jamieson identifies as the most powerful motivators for addressing climate change: economics and ethics—before showing the limits and barriers in each of these arenas. The most telling sentence in the whole book, for me, that reveals Jamieson’s perspective and its influence on his pessimistic view, is when he writes: “We live in a post-Nietschean world in which the gods are not available to give meaning to our lives, nor can nature provide transcendental grounding in a human-dominated world.”[1] For a book that is addressing global climate change and the effects it will have on the world population now and into the future, the unsituated “we” that opens this sentence is particularly revealing. Rather, Jamieson and his colleagues live in this post-Nietschean world and it is from this place that this book on economics and ethics is written. Part of the opportunity with which the global ecological crisis provides us is the potential to forge a way through the dark postmodern underworld where the gods are dead and nature is a backgrounded resource to a new world view that has room for intelligence and meaning to exist beyond the locus of the human being.

Where is the room in Jamieson’s approach to climate change for emotion, feeling, a sense of interconnection and, perhaps most importantly, grief at the loss and destruction? Ethics cannot be broken down into a series of equations like economics can—something deeper must be appealed to. At times this depth is almost reached by Jamieson, momentarily making appeals to “love, sympathy, and empathy”[2] and to an understanding of humanity as being a part of the natural world. Indeed, he writes that “we find meaning in our lives in the context of our relationship to humans, other animals, the rest of nature, and the world generally.”[3] However, just a few pages later he once again reduces the value of this relationship into economic terms, writing “The idea of nature as a partner in a valuable relationship makes itself felt in economic language when people talk about ‘natural capital’ or ‘ecosystem services.’ On this view protecting nature returns monetized benefits. Damaging nature damages ourselves.”[4] The appeals to meaning found in relationship feel hollow if they can simply be reduced into monetary terms.

Jamieson concludes his book by saying, “Despite the unprecedented nature of the challenge, human life will have meaning as long as there are people to take up the burden.”[5] Yes, I agree that great meaning can be found in taking on the work of defending the Earth and its countless species, as well as the multitude of human beings whose lives and livelihoods are threatened by the rapacious capitalist economy. But the meaning is not made simply by the work of human actions—the work is what reconnects our sense of value to that ground of meaning inherent in every creature, in every corner of the vast cosmos within which we are awakening to our integral part.

Jamieson, Dale. Reason in a Dark Time: Why the Struggle Against Climate Change Failed—And What It Means for Our Future. New York, NY: Oxford University Press, 2014.

[1] Dale Jamieson, Reason in a Dark Time: Why the Struggle Against Climate Change Failed—And What It Means for Our Future (New York, NY: Oxford University Press, 2014), 200.

3 Replies to “Engaging with “Reason in a Dark Time””