The discussion in the fifth section of Simon Nicholson and Paul Wapner’s book is entirely on the economic system and its impact and influence on the global environment. The section is titled simply “Economy,” but really it should be titled “Capitalism” for that is the only economic system that is actually addressed. The three chapters of the section present gradations from greening the industrial growth economy to addressing the hard truth that capitalism and human greed are the heart of the problem. While reading Peter Dauvergne and Jane Lister’s chapter on “The Promise of Corporate Environmentalism” I found myself feeling the hollowness of those promises. Big brand corporations making non-binding commitments of vague outcomes such as “delivering sustainable growth” and “performance without compromising sustainability”[1] in order to preserve their image, while still increasing the total destructive impact upon the planet, actually seems like a greater hindrance to the cause because it obscures where the real problems lie: in a model of trade that depends on exponential growth, exploitation, and limitless greed. 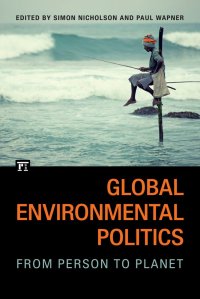 Paul Krugman’s chapter, “Environmental Economics 101: Overcoming Market Failures” addresses more realistically the ways in which the free market cannot address global ecological issues such as climate change. Yet ultimately his solutions also return to the altar of capitalism, simply relying on regulations and taxes to mitigate the crisis. An economic solution inherently calculates all loss in terms of monetary value alone, something that cannot account for the great suffering climate change will unleash—indeed, it has already begun—upon humans, animal and plant species, and entire ecosystems.

Finally, Naomi Klein’s piece, “Capitalism vs. Climate” dared to question the ideology of capitalism itself. In reading her portrayal of the climate change deniers of the conservative right in the US—who go to great lengths to prove global warming is a hoax, at times even sending death threats to climate scientists—I could not help but be curious at the psychology behind such actions. Clearly fear is a powerful motivator, but fear of what? Is it really fear of dismantling the capitalist system? Fear of freedoms being taken away? Or is there also a deep-seated existential fear of climate change itself? Allowing oneself to feel the true losses climate change will wreak across the globe—to a greater or lesser extent no matter what action is taken—is not central to the ideologies of right or left. What does fear of these losses blind us to? And what, on the opposite end of the spectrum, do they awaken in us?