I never imagined that I would know what it was like to be in a car for 1,095 miles straight, but now that I do I hope not to have to experience it again. Perhaps it was the two full days rest in Aspen, or just a strong desire to be back in our own home by the Bay nestled beneath our blanket of fog, but come Wednesday morning Matt and I decided to drive all the way home in one long shift. Or rather, we decided to keep the option open, in case we arrived at the campground in Austin, Nevada with enough energy and daylight hours to keep going to the coast.

The two whole days in Aspen were worth the trip itself, even if we hadn’t had all the other adventures and wonderful encounters along the way. There is something about Aspen that makes one feel as though one has stepped into a painting, like the moment Robin Williams arrives in heaven in the film What Dreams May Come. Everything is too perfect, each blade of grass arranged in just such a way as to set off the seemingly carefully placed rocks beneath the snowy white trunks of the aspen trees. The towering mountains with their rouge and evergreen flanks are dwarfed only by the vast sky, with its many hued cloud formations sculpted by a divine breath. We went on a brief hike the first day there, noticing the lupines and wild geraniums peering out among the grasses. Like the rest of the country, Aspen has also suffered drought this summer, which could be seen in the reddish dust that is usually moist soil. The wildflowers too were sparse this year; normally the mountains are garlanded in purple and yellow blossoms all throughout June and July.

The town of Aspen is as picturesque as the wild scenery, with quaint little houses surrounded by blossoming flower gardens, and old brick buildings with former store names carved into the very stonework overhanging the doors. The streets are all named after the miners who first settled the area. The design of the town reflects the natural surroundings, bringing aspen trees onto many of the sidewalks, even allowing them to grow through the center of the architecture in some cases. Strips of grass and fountains border the cobblestone streets, and narrow streams meander between the grassy banks and laugh their way over smooth river stones arranged beneath the clear ripples.

On our second day in Aspen we attended a concert put on by the American Academy of Conducting at Aspen. The orchestra, which gives young conductors the opportunity to learn their craft with the help of a full orchestra at their disposal, played three symphonies over the course of the afternoon, beginning with Haydn’s Symphony No. 85 in D major, written in 1786. This was followed by Mozart’s Violin Concerto No. 4 in D major, written in 1775 when Mozart was only nineteen years old. The solo violinist for this piece, Hannah Tarley, has been playing since she was two years old, and was the youngest violinist to lead the San Francisco Youth Symphony on tour. She played, to say the least, exquisitely. After an intermission, the final symphony of the day was Shostakovich’s Symphony No. 9 in E-flat major, written in 1945; however, we only heard the ending of this piece because we chose to take a stroll through the gardens of the Aspen Institute while the afternoon sun was still warm.

It was with some reluctance that we packed up the car for the last time and bid adieu to Aspen and its fluttering silver-green leaves and crystal streams. We headed west toward Glendale where we went back onto I-70. The mountainsides turned a sunburnt red, and each peak looked like a scalp with thinning tree hair that had spent too much time exposed to the sunlight. As we passed Mount Sopris I was already beginning to observe the much drier climate. A magpie, with its black and white wings, soared over the road. As we passed through Glendale I noticed a crew of carrion birds circling ominously over the town.

As the mountains around us became more angular and treeless, we listened to a debate between Richard Dawkins and the Archbishop of Canterbury. I was amazed to hear the sense of wonder in Dawkins’ voice as he described the unfolding of the universe and how it could give rise to “apparently purposeful” beings such as ourselves, that give the cosmos the “illusion of design.” This dialogue accompanied us for more than half of the day’s journey because occasionally it would cut out and we would switch to music, then try again an hour or two later. Because of this, the debate seemed to set the tone for much of the ride, giving rise to many exciting discussions between Matt and myself, including one regarding the language and cultures of animals, and whether or not they can be understood from a human perspective; if they cannot, as far as I see it, that is not proof that animals or even plants, cells, or minerals, do not have the same capacity for language, culture or spirituality that we do. It may, at this point, just not be able to be translated into something humanity can comprehend.

Our road followed the Colorado River for some time, and I marveled how this one river had been able to overcome these mountains surrounding us, carving such wonders as the Grand Canyon, and yet it could not—as of yet—overcome humanity, who has dammed it and siphoned off its waters until barely a trickle remains to empty into the Sea of Cortez. Eventually we left the Colorado River behind, and passed through Rabbit Valley and a park offering a Trail Through Time walk. As we crossed the border into Utah a signpost stood by the road warning of eagles on the highway, definitely the strangest of the many animal warning signs we saw over the rest of the day: moose, deer, cows, and hikers all had their own specific warning signs in different mountain areas.

The buttes and plateaus shifted into greener mountains and short trees as we entered Fishlake National Forest. To the side of the road I saw several cows and calves among the greenery, and past them a wood and metal fence climbing at nearly a 90° angle up a mountainside. Imagine the determination of the rancher who had put up that fencing, not wanting to lose a single acre of his property no matter how steep the terrain.

Mysterious train tunnels once again bored through the mountainsides as we neared Salina, Utah. Past the town flat green fields unfolded for several miles, dotted with horses along a placid blue lakeshore. Eventually we left I-70 and began the long journey upon the loneliest road in the West, US 50. Barely a car passed us. The fences by the roadside were constructed with rough-hewn branches, making the era we traveled through ambiguous. A neat little farm stood by the road named Duckworth Dairy. Eventually we entered the town of Delta, Utah, where a tiny wooden shack was featured in the central square: the very first house ever built in Delta. The house was smaller than a modest bedroom.

Outside Delta we passed a tree completely ornamented with dozens upon dozens of pairs of shoes. I once heard that a pair of shoes tossed over a power line means “I love you.” If that is the case this is the most loved tree I had ever seen, even if not a single leaf graced its branches.

Highway 50 went on straight for seemingly endless hours, with only an occasional crossroad going just as eternally straight in the opposite direction. We saw hardly anyone. We crossed over a snow white salt plain, passed Death Canyon, and entered into a new set of mountains. At some point we crossed into Nevada but it was hard to tell where. Our road less traveled was not busy enough to bother marking the state border. The landscape of Nevada seemed to be a repeating pattern of flat plain followed by a mountain ridge, then flat plain, mountain ridge, flat plain, mountain ridge. It was difficult to keep track, except by the changing names of the different national parks: Great Basin National Park, Humboldt State Park. A ranch in one of the mountain ranges had an entrance gate made entirely of bleached white antlers. Not long after we glimpsed a fence decorated in deer antlers. The deer population in that area must be abundant indeed. 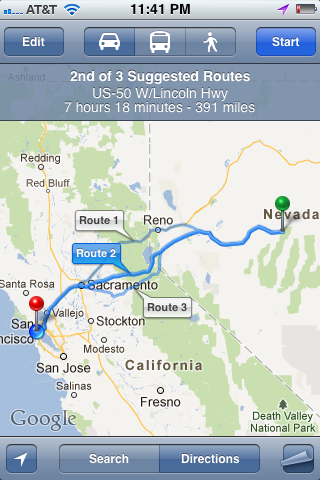 The largest town we saw on 50 was Ely, which boasted six churches on a sign at its entrance. From the size of the town there must be one church for every family. Some time after we had left Ely we came to the next largest town along the highway, Austin, where we had intended to camp. At this point it was only 5:30 pm, and with barely a consultation Matt and I decided we wanted to continue all the way home to San Francisco. So with 702 miles already under our belts we left Austen behind to complete the next 391 miles to the end of the continent.

The light slowly grew dimmer and fantastic sunset colors streaked the sky. Since we were driving westward the twilight seemed prolonged for many hours. We passed Sand Mountain, a large sand dune set back from the road, glowing white against the dark backdrop of the distant mountains. The last of the light began to fade as we left Carson City, and the last sight I saw before nightfall was a sign for the Old Pony Express trail. Then, in the still darkness, we entered California and began to climb into the Sierra Nevada Mountains. Immediately I wished we were passing through here in daylight, and I longed to see the trees, lakes, and mountains that were now shrouded in darkness.

The backroad route we had inadvertently chosen to take provided a stressful 70 miles of watching for deer potentially leaping into the road. In total we saw five deer, two coyotes, and a bobcat. The bobcat, standing directly in the center of the road, seemed not in the least disturbed by our car, and gently pawed its way off the road at its own sweet pace. When we passed where it had exited moments later, it was already swallowed up in the camouflaged gloom of the forest.

The last couple hours of the ride were the most difficult of the entire trip. Both Matt and I were questioning our decision to go 1,100 miles in one day. But somehow, close to 1:00 am, we arrived on our own familiar street, where parking is still familiarly difficult, and at last were able to be home.

So in total, after 110 hours of driving, 6,700 miles, 20 states, one province, dozens of family members and friends, and not a single argument, Matt and I ended our rather epic journey. As for the next one, who can say?

Roads go ever ever on,
Over rock and under tree,
By caves where never sun has shone,
By streams that never find the sea;
Over snow by winter sown,
And through the merry flowers of June,
Over grass and over stone,
And under mountains in the moon.

Roads go ever ever on
Under cloud and under star,
Yet feet that wandering have gone
Turn at last to home afar.
Eyes that fire and sword have seen
And horror in the halls of stone
Look at last on meadows green
And trees and hills they long have known.

2 Replies to “And Back Again”